Be on the lookout…

How long does the battery last?

The Cyclotrac V2 has an expected battery life of around one week in typical use cases, or up to two weeks for a stationary bike. The CycloTrac has two battery modes: active and sleep. When moving, gathering data, and sending it to the cloud, the battery life can last the full length of a 10 hour ride. In sleep mode, the battery could last twenty days. For the average user, it is recommended to charge your CycloTrac at least once a week.

How long does it take to charge the battery?

The battery charges in under 4 hours in average conditions.

Can I use it to track things that aren’t bikes?

Yes. The Cyclotrac V2’s features and a form factor that are ideal for bikes and other light vehicles, but in no way limited to them. Boomerang’s team uses them to track our luggage, automobiles, and other valuables.

Does the Cyclotrac require a data plan subscription? How much does it cost?

Yes. The Cyclotrac uses cell towers for tracking. Plans are available for $3.90 a month, or $44 a year. See “Activate Your Device” for the latest options and pricing.

Can I use my own SIM in the Cyclotrac V2?

No. The Cyclotrac is shipped with a worldwide SIM.

Will the Cyclotrac V2 work in my country?

Not sure if a Cyclotrac will work in your country? Contact our team for confirmation.

What mounting options are available for the Cyclotrac V2?

You can mount a Cyclotrac on a bike’s water bottle cage using the two tamper-resistant screws and bit included with your Boomerang. For bikes which do not have a bottle
cage, you can use a lock mount to attach the Boomerang to any appropriate frame tube.

Not sure if a Boomerang will fit your bike? Contact our team for mounting recommendations.

Is the device water-resistant?

No. The Cyclotrac’s openings are covered to prevent ingress of dirt, mud, and water in normal riding conditions. However, jets of water (such as from a hose), or submersion will damage the device.

How does the Cyclotrac V2 use GPS?

The Cylcotrac V2 has an onboard chip to pinpoint its location using satellites. While it’s common to refer to all satellite positioning simply as “GPS”, GPS is a specific satellite system maintained by the United States. The Cyclotrac actually uses three satellite systems: GPS, Beidou, and GLONASS, to ensure reliable and precise positioning worldwide.

How does the Cyclotrac use cellular networks?

The Cyclotrac V2 has an onboard 4G cellular antenna and SIM card.

It uses the 4G network to send information such as location (determined using GPS), battery level, and other events (like alarm alerts). It also receives information through the cell networks, like alarm arm and disarm signals and firmware updates.

How does the Cyclotrac V2 use the cloud?

The cloud acts as a gateway which processes and stores information going to and from the Cyclotrac. For instance, for location tracking:

1. A Cyclotrac uses GPS to fix its location.
2. The Cyclotrac sends out its location over the 4G cell network.
3. Boomerang’s cloud receives the location signal, processes it, and stores it.
4. The cloud sends the location information to the Boomerang app, which displays it on a map.

How does the Cyclotrac V2 use Bluetooth?

The Cyclotrac V2 has an onboard Bluetooth antenna.

What is firmware? What are firmware updates?

Firmware is the software run on the Cyclotrac V2. It’s stored in its internal memory and executed by the Cyclotrac’s processors. The firmware acts as the Cyclotrac’s set of
instructions for controlling itself and performing certain tasks- such as turning the alarm on and off, or waking up in response to movement.

Keeping firmware up-to-date is important for keeping the Cyclotrac V2 running smoothly, much like doing maintenance on the rest of your bike. For the latest firmware
information, see the Updates and Instructions section of our website.

Does the Cyclotrac eliminate the need for a lock?

No. The Cyclotrac is intended to be an additional layer of defense used in combination with a U-lock or other means of physical security.

Why isn’t the Boomerang hidden?

The clear presence of a tracker, in combination with an audible alarm, present a powerful means of preventing your bike from being stolen in the first place.

A visible tracker presents a theft deterrent. We confirmed this in tests with the San Diego Police Department and the BART Police, where thieves avoided Boomerang-equipped bikes because of the visible, audible presence of the Cyclotrac.

Hidden trackers, meanwhile, function only as a way to recover your bike once it’s been stolen, and they often fall short in that role. Metal bike frames block GPS and cell
signals. They limit the size, and therefore the battery life, of the tracker. Hidden away, it’s harder to access the device for charging and inspection.

Prevention and recovery– we don’t make you choose.

How does the Cyclotrac V2 compare to miniature Bluetooth trackers?

Small, tag-type devices do no tracking of their own. They send out short-range Bluetooth signals. A smartphone app then uses the tag’s Bluetooth signals to guess the location of the tag. This works well for finding lost items in the home, like a pair of keys or a TV remote. However, it can’t track moving things, it can’t track things in real time, and it only works within Bluetooth range of participating phones- about 400 feet.
Stolen bikes don’t stay still or stay close, so they need a more capable device. A Cyclotrac V2 tracks moving objects in real time, anywhere with a cell signal. Plus, the alarm and visible deterrent gives Cyclotrac users additional tools for defeating thieves.

Where is the Cyclotrac V2 made? 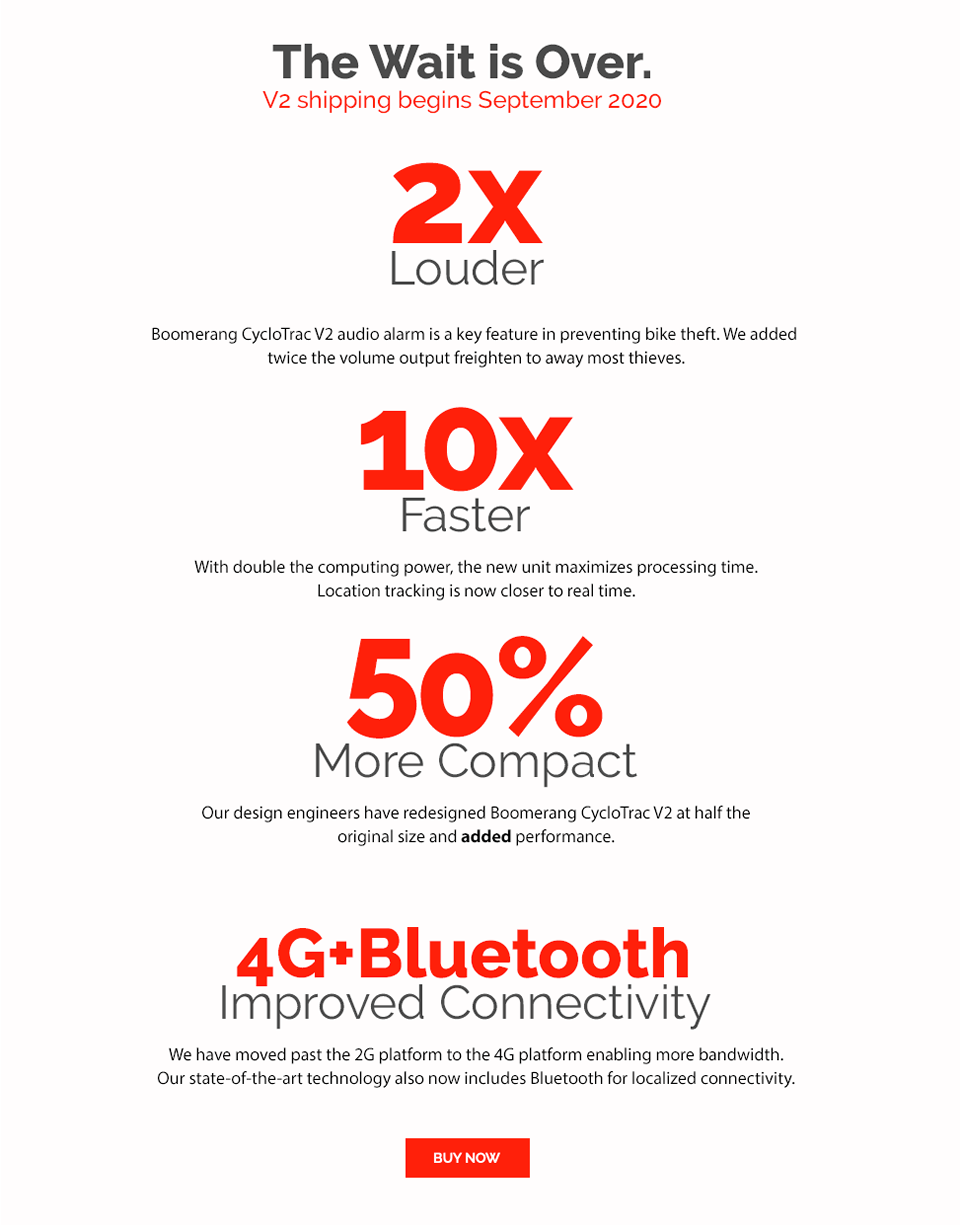